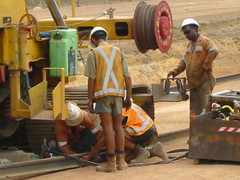 Global Warming Fraud Reflects Too Much Government Money And Power

One insidious aspect of huge government is its ability to so overwhelmingly fund a cause that it perverts it. The perverted cause becomes a government-supported industry whose purpose is to grow and feed itself like the rest of government. Its power, control and money grow at the expense of all we hold dear – like freedom, individual rights, productivity – but most especially, truth.

This article summarizes essential points of this aspect for the Global Warming fraud and the crisis-driven government-industry complex it has spawned.

The Global Warming Crisis is only one of several government-sponsored crises that have cut deeply into the rights, social structure, and productivity of the U.S and its citizens. It shows the 4-stage progression to oppression that huge government helps create for the power, control and money it offers itself and its affiliates.

Let me state these steps then tie them to what tyranny the global warming hoax has led us.

4 Stage Progression of Government-Supported Crisis to Tyrannical Control Massive government funding leads through 4 stages to a government and crisis-based affiliated complex that exercises tyrannical control over citizens. These stages are:

*Stage 1: A cause is identified for government funding – from a few facts found

*Stage 2: Cause is propagandized as a crisis for urgent solutions and government funding – from distorted projections of few facts

*Stage 4: Government and the crisis-based affiliates form an incestuous complex exercising crisis-justified tyrannical control and power. Propaganda becomes essential for continuation and growth of primarily government funding. Facts are perverted to support the ‘party-line’ while opposing facts are suppressed. Those opposing the party-line are scorned and vilified.

The end result is a crisis-driven conglomerate of industries and agencies which is effectively a government- supported tyranny based on propaganda and the suppression of the ‘facts’, the truth, and people’s freedoms.

Global Warming’s stage 1 started from a study that showed temperatures were increasing – and more so as time went on. Stage 2 began with attributing the warming to increasing carbon dioxide (CO2) in the atmosphere – trapping heat just like the glass of a greenhouse traps heat to keep the plants warm. But when the rising carbon dioxide appeared to track man’s rise in industrial outputs it made global warming a man-made crisis. Funding takes off.

In Stage 3 countries setup agencies to deal with global warming and held international meetings to find ways to control future energy use. The ‘carbon footprint’ came into being. Extensive funding for global warming facts, projections, and solutions gave us ‘global warming-friendly’ ones. The party-line perverted results and interpretations while pushing for more control over people and industries. Global warming propaganda grows to convince the people it’s all settled science and those opposing it are crackpots. Government funding rises.

Stage 4 explodes on the scene with national and international programs and meetings to decide how politicians and money-hungry scientists will control industry. Unlimited and endless funding is forthcoming for all those ‘on board’ the Global Warming train with hundreds of billions-of-dollar-consequences to our industrial lives. The propaganda has the public and media on board.

Fortunately, many brave scientists objected to and proved how fraudulent or irresponsible the facts and assertions that supported global warming were. They did it on their own ‘dime’, and faced being labelled heretics defying the ‘settled science’ and threatened with loss of their positions and future prospects too.

But it was only when the emails exchanged among the global warming proponents were ‘hacked into’ that ‘Climate-Gate’ became a major media issue. The emails made it clear that concerted effort was going into covering up opposing data. Global Warming scientists had intimidated scientific journals to keep sceptics from publishing, and they had altered data to make the phony case for man-made global warming. NASA’s Goddard Institute even stonewalled freedom-of-information efforts to hide the fraud and keep the money flowing.

A government funded crisis-based affiliate complex can pervert science and restrict truth to achieve their ends of money, power and control.

What we’re left with:

We’re left with much of the crisis-based complex. With the power they’ve assumed, they’re spinning their way out of ‘Global Warming’ into ‘Climate Change’ to justify their support. It’s almost impossible to tear this apparatus down. We’re left with more government control and less freedom.

This is how big government grows bigger and more tyrannical. The divorce and domestic violence complex is another government-supported fraud that followed the same pattern.

Shane Flait gives you workable strategies to accomplish your goals in financial, legal, tax, retirement and protection issues. .
Read his ebook: ‘Wise Way to Financial Independence’ =>
http://www.SovereignU.com
Get his FREE report on Managing Your Retirement =>
http://www.easyretirementknowhow.com/FreeReportandSignUp.htm